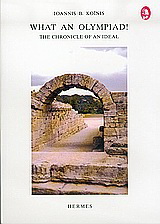 The Chronicle of an Ideal

This is an essay on the current predicament of the Olympic games, written by an expert. Ioannis Koinis was successful as an athletic champion in the field and earned respect as a medical surgeon. His enormous experience in issues surrounding modern sport is distilled in this short, well-documented book, an authoritative account containing a wealth of information. It covers wonderfully the historical perspective from antiquity to our times, the miracle of amateur competition and fair play: issues of high moral ground. It also covers aberrations from what is natural, fair, and normal: intrigue in sports administration: declining standards in an ever-expanding Olympic spectacle driven by publicity and commercialism; straying from the right way with the emergence of doping and generalized cheating; and, finally, thoughts on the way out of all this. Some of John’s views may run against established norms. But the arguments are coherent and the reasoning behind them irrefutable. They make absorbing reading. What emerges forcefully is the author’s own image as a lofty personality in the world of athleticism and an adept scrutiny of the intricacies of Olympic sport.