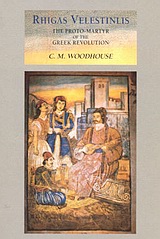 The Proto-Martyr of the Greek Revolution

12.23€ -11% 10.88€
ΚΑΛΑΘΙ
Rhigas of Velestino (1757-1798) is one of the great national heroes of modern Greece, for it was he who some thirty years before the outbreak of the Greek War of Independence in 1821 first conceived the possibility of a full-scale national revolution to free Greece from the domination of its Ottoman overlords. His aim was not simply an armed rebellion but a regeneration of his people, through education, literature, propaganda, and social and political awareness. He wrote patriotic stories, poems, scientific lectures; he published detailed maps, translations from French and Italian, and drafted a constitution based οn the ideology of the French Revolution. He was the first Greek to insist that the popular language, or demotic Greek, should become the official language οf independent Greece. Born in Greece under Turkish rule, Rhigas emigrated successively to Constantinople, Bucharest and Vienna. He recruited his supporters and laid his plans among the expatriate Greek communities, and he also had many contacts, through his successful activities as a businessman, in the Greek mainland and islands. But he himself was not to witness the realisation of his vision. Οn his way to Greece, where he intended first to stir up the Mani and then move north to Epiros and Macedonia, he was betrayed, arrested by the Austrian police, extradited to the Turkish authorities, and executed, with seven colleagues, at Belgrade. This book is the first comprehensive study of Rhigas ΄s life and ideas in English.

C. Μ. Woodhouse (1917-2001) graduated from Oxford University in 1938. Ιn the Second World War he served in the campaigns in Greece and Crete, and in the Greek Resistance under enemy occupation. After the war he worked in industry and for the Foreign Office, and in 1959 he entered the House of Commons as Μ.Ρ. for Oxford (was elected between 1959-1966 and 1970-1974). The author of many books οη Greek themes (among which: "Apple of Discord: A Survey of Recent Greek Politics in Their International Setting", 1948; "The Struggle for Greece, 1941 - 1949", 1976; "The Rise and Fall of the Greek Colonels", 1985; "George Gemistos Plethon: The Last of the Hellenes", 1986; "Rhigas Velestinlis: The Proto-Martyr of the Greek Revolution", 1995, and "Modern Greece: A Short History", 1999), he has been a visiting professor in modern Greek at King΄s College, London University, a visiting fellow of Nuffield College, Oxford, and an honorary fellow οf New College, Oxford. He was a corresponding member of the Academy οf Athens and an honorary member οf the Greek Sacred Squadron.
Δείτε όλα τα βιβλία του συγγραφέα