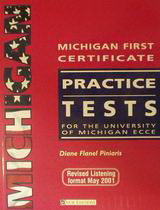 For the University of Michigan ECCE

Michigan First Certificate Practice Tests for the University of Michigan ECCE contains six complete ECCE practice tests. Each test has been specially designed to familiarize students with the exact format of the ECCE as well as to provide them with the opportunity to continue building their competency in each of the skill areas tested on the exam.[...]

Diane Flanel Piniaris is a native New Yorker who has been teaching English as a Foreign Language (EFL) since 1980. After graduating Cornell University in Ithaca, New York, she spent nine years working as a book editor for publishing houses in New York City an London, where she received certification in TEFL methodology in England. In 1980 she moved to Thessaloniki, where she studied Modern Greek and begun her EFL teaching career. From 1983 through 1992, she lived in Germany, where she wrote curriculum materials and tought courses in reading, writing and speaking skills for US Army soldiers and their foreign-born spouses. In 1992, she returned to Greece, where she resumed her EFL teaching cereer and begun writing textbooks. She currently lives in New York City, where she continues to write and edit EFL textbooks.
Δείτε όλα τα βιβλία του συγγραφέα