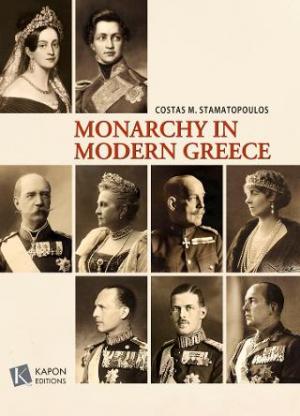 For what is perhaps the first time, although at the level of an

introduction, an objective and, at the same time, global account

of how the institution of monarchy was implemented in

modern Greece is undertaken here. An attempt is made to clarify

and respond to most of the questions and perplexities in connection

with this subject. The reader, provided with the necessary

data on the political behaviour of the Greek through time,

is led to understand why, at the end of the Struggle for Independence,

this particular political system was chosen, through

taking into account the state of affairs in Europe, the need to

put an end to the vicious circle of civil conflicts, and the views

on the nature of the state derived from the Greco-Roman tradition.

of monarchy in modern Greece, principally from the viewpoint

of the quest for a more deeply-rooted popular legitimation,

and an explanation of the constitutional dimension of the issue,

with emphasis on the profound contradictions of the constitutional

texts and the vulnerability of the system of Crowned

Democracy. In the second section, there is a portrait of three

figures belonging to the Dynasty, while, in the ambivalent instances

of Constantine I and Frederica, an attempt is made to

separate myth from historical reality. The third section is devoted

to the social and public-benefit services performed by members

of the two dynasties in time of peace and war, and to the

fundamental and deeply-rooted societal dimension of the institution

of monarchy as regards the soul, and recalls attention to

and love. In the Epilogue, the reasons why and the ways in

which, chiefly under the Junta and what followed, the strong but

difficult relationship between the people and monarchy was torn