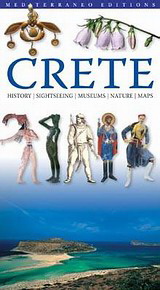 On the southernmost edge of Greece - indeed of all Europe - and in the midst of the eastern Mediterranean, lies Crete, an island with a population of more than 600,000 and divided for administrative purposes into 4 Prefectures: Hania, Rethymnon, Heraklion, and Lasithi. An island much celebrated in song, and with a rich history and culture, it was destined 5,000 years ago to become the cradle of the renowned Minoan civilization and the birthplace of Zeus. Here, on Dikti and on forested Psiloritis (Idi), the greatest of the gods was born and raised, whose legend nurtured a rich mythological tradition with illustrious protagonists such as Europa, Minos, Pasiphae, the Minotaur… Unique archaeological sites such as those at Knossos, Phaestos, Mallia and Zakros have come to light, documenting the magnificence of this civilization which shone not only in the Aegean but also throughout the whole of the Mediterranean. It is also a fact without precedent that in this limited geographical space, civilization itself never dimmed over the passage of time. The Geometric, Archaic, Classical, Hellenistic, Roman, Byzantine and Venetian periods all left their contribution in the most glorious way, forming a landscape of many cultural elements - the grandiose, multicoloured and vibrant scenery of a continuous historical progression which, through the sounds of the lyra, mantinades and the forceful steps of the dance, echoes the passions and spirit of the land to this day. A noble, gallant spirit which grew up alongside the wild mountain peaks, the imposing gorges, and the unexplored caves, blossomed like the olives and the wild flowers found in the most improbable locations, and achieved calm tranquility in the vista of the indented coastlines with their golden sands and blue-green waters.