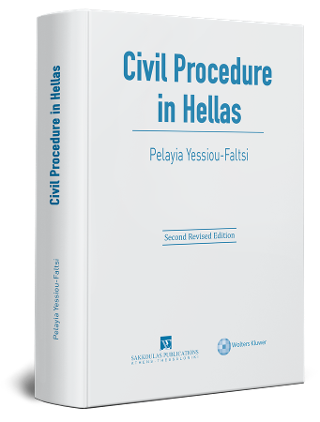 Although the main institutions and concepts of the Code have remained intact, there has been a radical revision regarding the mode of conducting the first instance proceeding, as well as the means of evidence to be produced. Ordinary first instance, as well as, in principle, second instance proceedings, are now purely written, while testimony may be allowed only in exceptional cases. The ability of the parties to conduct several procedural acts through electronic means is also an important novelty brought about by Law 4335/2015, which, however, to this day, due to technical shortcomings, has not been yet implemented on a general scale. In addition, the enforcement proceedings for money claims have been almost totally revised. Most of the enforcement acts must be now conducted through electronic channels, since February 2018 including the auction. Beyond the simplification of the revised enforcement proceeding, the possibilities of the debtors to oppose execution have been considerably eliminated.

This book contains an extended version of the second edition of the 2019 monograph, originally published in the International Encyclopaedia of Laws/Civil Procedure, Wolters Kluwer, 2019. Accordingly, the present publication, as also its first edition, again follows the detailed plan elaborated by the editors of the series. In addition, an effort has been undertaken to enrich the original monograph with some more specific aspects of Greek Procedural Law, including references to recent standard Greek legal scholarship, to several specialized monographs related to the imposed modifications and to some important recent court decisions.

To this day, the book “Civil Procedure in Hellas” still remains the sole comprehensive monograph of this length to treat the entire Greek Procedural Law in English or in a language other than Greek. This second edition, encompassing the radical changes brought to the structure of the Code of Civil Procedure 1968/1971, has been elaborated with the hope that legal professionals and legal scholars will consult it when needed with the same level of interest as the first edition.