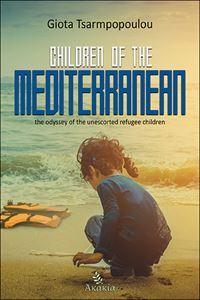 Children of the Mediterranean

The Odyssey of the Unescorted Refugee Children

It’s a new- historical, realistic, social- political novel. It is a current, strong reference to the refugee crisis, which strikes the unaccompanied innocent refugee children.
At the beginning of the autumn of 2014, Leto, a teacher of Greek literature is assigned in a secondary school of Kos, as a contract teacher. There, she meets a lot of refugees from Syria, who arrive on the island, with old and rusty boats, from the Turkish shores. After a big wreck, she consciously decides to help them as a volunteer in “Hippokratio” hospital of Kos. There, she is responsible for three heavily injured men from Syria. One of them is Aslan, a friend from their common post graduate studies in Aberdeen University, Scotland. In the same room, there are two other friends of him, Jamal and Ossama. They all accompany nine refugee children, orphans of the war. Leto is involved in the life of the three injured men and the nine refugee children. The refugee issue becomes her own issue, a part of her, which she wholeheartedly expresses through playing her guitar to her students of Kos throughout her whole life. She challenges the attitudes of European Union and the United Nations High Commissioner for Refugees, as well as all the involved nations. She stands by the unaccompanied refugee children, sensitively, who become victims of dangerous criminals and they get lost in den of vices of prostitution, pederasty, trafficking in human organs, drugs and so on, on their way to the Central and North Europe. Leto’s strong love for Aslan and her love for children leads her to the Central Europe where she participates energetically to the refugee matter, and she takes position practically, to an item which overconcerns all Europe, the whole world, the United Nations, as it brutally beats all the nations of Mediterranean sea, pandering hidden and illegal interests, but obvious too. The book challenges racism, xenophobia and religious prejudice, stands by the human and supports the universal values that are torn up by the war, the civil war, the total hatreds, and fanatics. It is asking for solidarity and faithful implementation of laws and rules of the U.N., which are closely linked to the human rights.