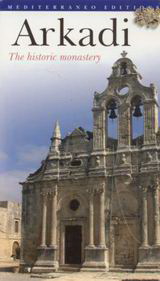 Near Rethymnon in the heart of Crete, a plateau in the shadow of sacred Mt. Ida covered in beautiful pine trees was chosen during the early Christian years as the site for Arkadi Monastery. The access routes and the wider area have been generously endowed by Mother Nature, history, and culture preparing the traveller, the visitor, and the pilgrim for the grandiose picture of the Monastery that they are to be confronted with. A monument of architecture, culture and history, this Monastery with its grand church facade, strong intellectual tradition, wealth of artistic creativity and its key role in the historical developments on Crete during the 19th century have made it an eternal symbol of freedom and heroism with worldwide impact.