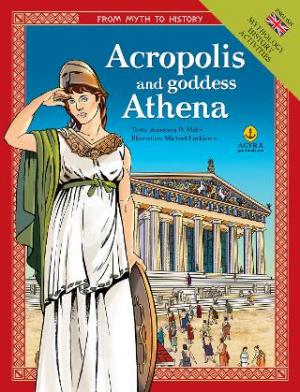 FROM MYTH TO HISTORY

Why was Athena the favorite goddess of ancient Greeks and also the goddess of wisdom? How did the city of Athens get its name? What was the Panathenaea? When and how was the first Acropolis built? Who was the leader of ancient Athens and how did his dream of rendering Athens a cultural center come true? How did the Parthenon get his name and what was the relationship between goddess Athena in the Acropolis? Why the 5th century BC was called the Golden Age? Who was Lord Elgin? How and why classical Greek culture affected the whole world? Where is the new Acropolis Museum located, and which monuments are exhibited there? ...these are some of the questions answered in this fascinating book of myths and knowledge.

At the end of the book the reader can find additional useful historical information and activities that will assist the consolidation of fundamental knowledge on such significant period of the Greek history.