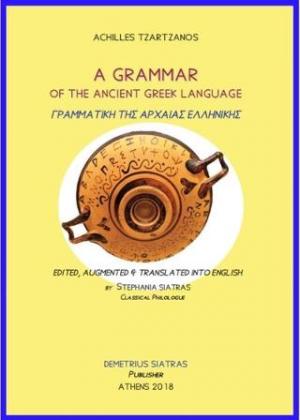 A Grammar of the Ancient Greek Language

Achilles Tzartzanos was born in Tyrnavus in 1873 and died in Athens in 1946. He studied Classics in the Athens` University. This book (first Greek edition 1931), at most a grammar of the Attic dialect, is a classic of its kind; a concise essential handbook for both the student and the scholar that need a good knowledge of the ancient Greek language to read and study the Classics from the 6th century BC to the Hellenistic era, as well as The Bible and all the written in Greek religious texts. This book put his seal on the Greek education of the 20th century, being for decades the official handbook; also, it probably was the Greek book with the biggest circulation of all times, with many editions and reprints since our days; a number of 5,000,000 copies printed during the previous century is probably just a moderate estimation. The current English translation is faithful, so far as it concerns the original text; some minor additions and corrections by the translator are cited at the Hypomnema.